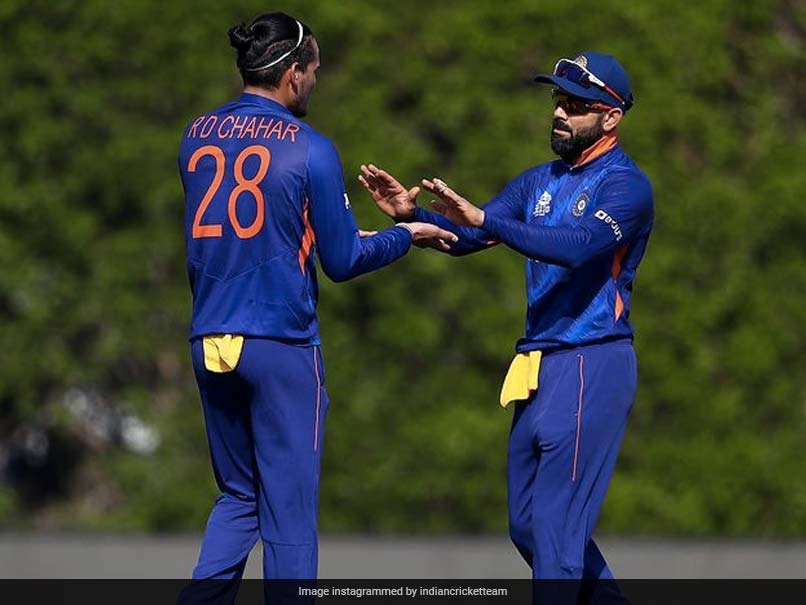 India warmed up well with two consecutive victories ahead of the 2021 T20 World Cup. The inaugural champions beat Australia in their second warm-up game at the ICC Academy Ground in Dubai on Wednesday. Bowling first, Indian spinners dominated with the ball as Australia were left reeling at 11/3 in the fourth over of the match. Later, the Aaron Finch-led side recovered from the early blows as Glenn Maxwell (37) and Steve Smith (57) stitched together a 61-run stand for the fourth wicket. Rahul Chahar too was impressive with his variations throughout the Australian innings.

The leg-spinner was bowling his third over when an incident involving India’s designated skipper Virat Kohli gained everyone’s attention.

The incident took place in the 12th over of the match when Glenn Maxwell and Steve Smith were batting.

Chahar was hit for a boundary on the first ball of the over by Maxwell. The in-form Australia all-rounder played a reverse sweep for a four and put pressure on the leg-spinner right from the first ball.

Just after that delivery, Kohli was seen having a conversation with Chahar.

A few deliveries after the discussion between the duo, Chahar went on to clean Maxwell’s wickets and put an end to his partnership with Steve Smith.

ICC shared a video of this sequence of events on its Instagram page. “Maxwell’s lovely reverse-sweep. Kohli’s advice to Chahar. Chahar fires back with a wicket. There’s a lot to appreciate in this passage of play,” ICC wrote.

This was the last practice game for both the teams ahead of the Super 12 phase. India will take on arch-rivals Pakistan in their first game of the tournament in Dubai on October 24 while Australia will play South Africa on October 23 in Abu Dhabi.

Topics mentioned in this article

Which countries are best for road trips? See the top 5...